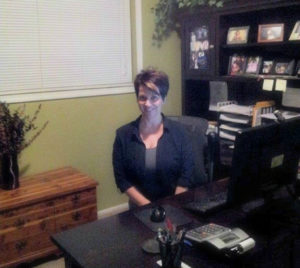 In 1997 Shawn answered an old fashioned newspaper advertisement placed in the South Idaho Press; a newspaper that no longer exists. She, a former manager at Walmart, stood on the steps of an unknown home, took a leap of faith, and rang the doorbell.  I cannot now remember what stood out on her application/resume.  However, out of the 40 some odd respondents, she was the only one I invited for an interview.

The only thing that I recall about the interview now was that my son walked into the office during the middle of it, wearing only a towel.   We had a good laugh about that.  I suppose it’s always the laughter (and tears) that one most easily remembers.

Since Shawn couldn’t easily fit into the little home office I was using, and since there were half naked children running around much of the time, I rented a room in the lovely cinder-block office building a few blocks away.  If it was good enough for H&R Block (downstairs), it was good enough for us (upstairs).  It was one of the few office spaces available for small businesses to rent in Burley, Idaho.

Because I value surface area and had/have strong opinions on how to avoid Carpal Tunnel Syndrome while using a keyboard, I purchased three large 8-foot banquet tables to act as our desks!  Two facing the wall, and one between us.  Shawn, I believe, likes to mention those banquet tables to people.  I take this as evidence that she was duly impressed with the furnishings.  Actually, now that I think about it, maybe we started off with just 2, because I can visualize her sitting with papers (invoices) all around her in the center of the floor, taking on the first project of catching up on some invoicing.  Surface area!  That’s probably why the 3rd banquet table got added.  Yeah, I think that’s it.

These were, mind you, the days before cyberspace.  We created a computer network within our own office and worked on that so much that after awhile, the computer tech guy running his business out of a corner office in the same building, said “Cliff, why are you coming to me with this question, you know more about networking computers now than I do.” I can’t tell you how many times I have been lying on the floor under Shawn’s various desks over the years saying “Don’t we own a vacuum?”  “We need a snacks policy” or some such thing, while messing with computer and phone wires.  Wires wires wires.  What a mess.

The level of comfort and trust required to share an office with someone is one thing.  Being a new employee and sharing an office space with the owner of the business while speaking to vendors and customers in front of that owner is quite another. It requires courage!  Shawn had it.  Her willingness to be vulnerable, to share that space of trust over those years, to allow me to see into parts of her personal life and she into mine, without ever breaking that trust, is something that I do not undervalue.

As I recall–from a story she told me later–she only stepped out of the office once, very early on, when she became nervous with the way I was addressing a representative of MCI.  Ha!  No, it wasn’t that I was getting loud . . . just pointed.

Shawn has observed other office employees come and go.  Very early on, she remarked that she never knew if someone was going to be there the next day.  Thankfully, we eventually found Trish, and the two of them became what seemed to be fast friends and effective office mates.  We miss you Trish!

Shawn tried working from her home at least once, early on, but . . . (see half naked kids sentence above) . . . we always came back to the cinder-block building, later moving into some bigger rooms with more windows.  Yes, in time she got a big fancy desk which became a pain to transport to her home again, home again, jiggety-jig. (Thank goodness I wasn’t around that day!) Come to think of it, that desk is now gone and, well, I don’t know.  I’m losing track of what the hell is going on with desks in home offices.  I just know I haven’t had to lie ion the floor in snack debris for a long time and that she has, at home, easier access to a vacuum.

The other thing I prize about Shawn is her ability to build and sustain warm relationships with our new and long time customers and vendors over the years.  Almost all of these relationships are sustained exclusively over phone and email.  She is, perhaps, more than anyone, the most familiar audible voice associated with the company and on a first name basis with so many customers and vendors!  I appreciate the care and professional attention she has given to all of them over the years.  I know they appreciate it too.  As we went out for Shawn’s 20 year anniversary dinner in Twin Falls I realized, with the help of others, that we should have probably had the dinner in San Diego, where some of the longest and strongest vendor/customer relationships exist for her.   Perhaps for her 25th year celebration we can make that happen.

Thanks for everything Shawn!

Here’s a photograph from around 1997 of the towel boy and his siblings: 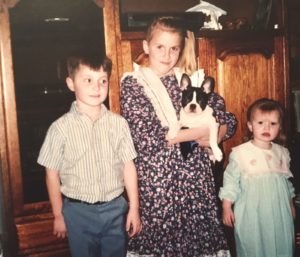 Here’s a photo of the towel boy 20 years later: 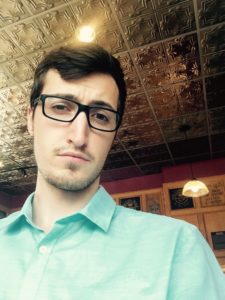